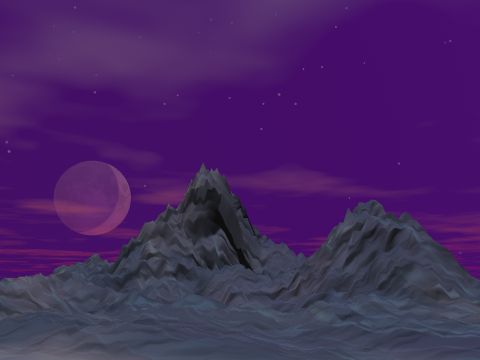 Just as I might want for a warm, sunny place to escape to in my mind, I might want to capture the cold of my home city of Montreal. In recent years, the climate here has been one of freezing rain, which in 1998 produced a disaster in much of the province of Quebec. In 1998, a bus ride through the streets of the outskrits of this island city seemed unreal during our ice storm, with thick ice crystals covering branches of all the trees, which had been bent to the ground under the weight. And at that time the electricity had also failed, for which reason there was an unaccustomed lack of artificial light in the night. There were no traffic lights working, or street lamps. It was almost like walking on the moon might be. And this image captures the spririt a little bit.


In this image, the surreal aspect is produced by specifying a sky that is unrealistically clear and clean. Bryce will want to put haze at default levels that concentrate near the horizon and cloud densities that would obscure the stars. But instead I followed my whim and made whisps of cloud, that would correspond maybe to skies we find at lattitudes far from civilization. In 1998 smog-struck Montreal did not see such a sky even in the absence of light pollution, but in this creation it conveys the message of alienation and pristine cold. Montreal's actual sky during the ice storm was an unsettling, opaque black.